With the price of cryptocurrencies bouncing back, interest is reawakening in crypto mining, not least with a range of coins offering viable alternatives to mining Bitcoin. Which simply begs the question, where do you start? If you want to get a mining rig together of your own, and get the necessary software for it, what do you need to do?

Good question, and it’s been answered.

YouTuber VoskCoin has put together an hour-long guide on his channel, where he’s gone through the basics of putting a new crypto mining rig together from scratch. He’s up front that he’s using new components to do so (although makes the point that it’s doable with less expensive, second user components as well), and as such, the video works both as a guide to building a rig from scratch, but then also of getting mining software up and running.

The build, particularly for those used to working with traditional PCs, is fascinating. VoskCoin’s tactics for dealing with airflow and combatting overheating lead to a machine that’s, well, dramatically different looking from a regular computer. The days of using a traditional case to house a machine are long gone it seems. 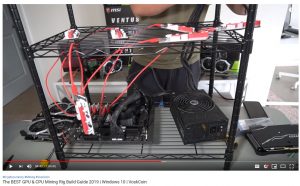 But then working with a rigframe allows for flexibility in the build, and crucially, allows for space for the components to (metaphorically) breathe.

The video zeroes in on using multiple GPUs in a single rig (which are major generators of heat), and to the outsider, they’re arranged like clothes on a washing line. Yet it’s an intelligent set up: if the temperature of the cards goes up, the hash rate of mining is likely to go down, as the card speed is dialled down to combat temperature rises. As such ‘floating’cards are attached to a rig via zip ties, “It’s not the prettiest way to mount your cards, and it may not look supercool”, VoskCoin – with no degree of understatement – observes.

But that’s not his aim. He wants maximum airflow, and he wants a very cheap and very safe way to make a mining rig. Which is what he puts together.

Once he’s gone through the build, as the timer hits around 39 minutes, VoskCoin turns his attention to mining software. He goes through setting up Cudo Miner as part of the video, and how it works as a plug and play option, and little experience is required. 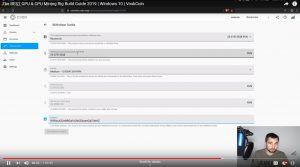 He also goes through choosing which coin to mine, and the ease of switching between currencies. Plus going under the bonnet of the software to monitor the progress of the mining itself. And – good man – he talks about how we all get paid too.

The full video can be found here https://www.youtube.com/watch?v=a88b3bZwDi8&feature=youtu.be